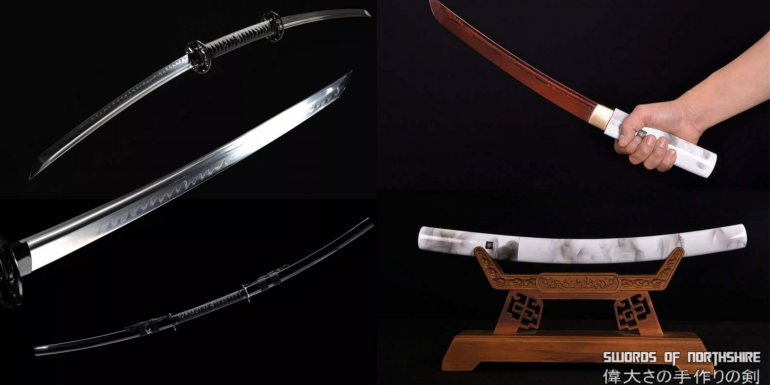 If you grew up watching samurai movies, then you almost certainly earned your own authentic sword. Despite adolescent pleas, not many parents are willing to hand custom a sword over to their children. Even lenient parents shake their heads at wish lists with things like “ninja sword” written in all capital letters as holidays come and go.

Now that you’re a grown man with your own source of income, you don’t have to rely on your parents. You’re an adult, and no one can stop you from spending your hard-earned money on a top-of-the-line custom sword.

If you’re interested in buying a quality sword or knife, then turn to Northshire. Swords of Northshire has a huge selection of swords at a wide range of prices.

Swords of Northshire Makes an Excellent Sword for Custom Buyers

Swords of Northshire devotes itself to making high-quality swords of all types. Some styles currently available from the company include:

Each of these styles offers its own unique qualities. Since they’re all hand-forged to meet the expectations of the world’s top collectors, you can count on each one to fulfill your dreams.

Chances are that you will never have to take one of these swords into battle. If you did, though, you would have a fully battle-ready weapon in your hands. Each item from Swords of Northshire is specially made by the world’s most trusted forges. Many of them are intentionally designed to meet the specifications of historical swords. That includes tempering the metal to withstand battles.

Perhaps a sword isn’t the most effective option for home protection, but it is certainly one of the most attractive.

The Japanese Tanto was a knife or dagger that was equipped with a double or single-edged straight blade. The Tanto was designed as a stabbing weapon, but it was also used for slashing. The Tanto pairs well with the Katana, Ninjato, or the Tachi swords which were typically worn on a belt. The knife is best used as a tactical utility knife, or in close combat.

Swords of Northshire offers original Tanto swords and more! They also offer blades from manga, anime, video games, and movies. Check out their selection and find the perfect piece for display, ceremonial use, or tactical practice.

The Wakizashi sword is equipped with a shorter blade than a Katana. The Wazikashi was used in close-quarters fighting. The Wazikashi and Katana were worn together on a belt and were the official symbol of a samurai. Explore Swords of Northshires handcrafted swords to create your own personal samurai set! Swords of Northshire designs their swords with unique and intricate designs to ensure that each sword created is original. The swords are created using 1060 and 1095 high carbon steel

The Ninjato was a favored weapon carried by ninjas. The sword is characterized by a short sword with a straight blade. In urban legends, Ninjatos were carried and used by ninjas as an extra stealth weapon. The style of the Ninjato is one of the defining features of ninjas in pop culture. Each sword is designed with its own unique design, coloring, and sheath.

Custom Katana Swords for Your Collection

They sell custom katana swords in addition to historical replicas. Custom swords are made from your choice of:

You can also combine materials to build the sword you wanted most as a child.

When buying a custom katana from Swords of Northshire, you get to specify some of its most important features, including:

You can even personalize the sword with a signature engraving.

A custom sword starts at a very reasonable price. Swords of Northshire sell basic versions for about $200. Practically anyone can afford that. If you want the best materials and strongest tempering, you could spend up to $2,000. That’s considerably more expensive, but your sword will look and feel better than the cheaper versions. Whether you plan to hang it on the wall or have fun attacking watermelons in the backyard, quality matters.

It takes a few weeks for Northshire to make a custom katana sword, so make sure you place your order ahead of time.

Accessories for Your Swords

Northshire sells sword hangers that will enhance the beauty of your blade. The double sword stands hanger gives you an attractive way to store two blades. The traditional two-layer wooden sword stand is potentially even more attractive with its real wood materials and detailed etchings. It brings out the beauty in all of your Japanese and Chinese swords.

As a successful man, you get to make your own choices. That means you can finally have the sword you’ve wanted since you were just a boy. When you’re ready to buy your own blade, make sure you spend your money on a quality item that will retain its strength and beauty throughout your lifetime. Swords of Northshire is always a good place to start looking.