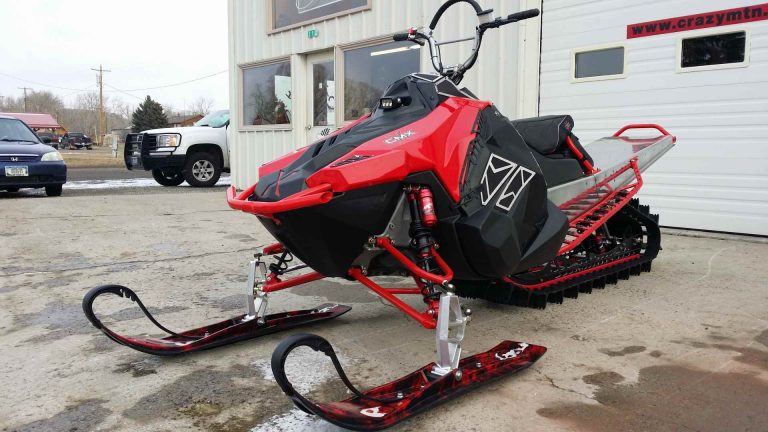 When it comes to a sledhead, absolutely nothing compares to winter. The first big snow spreading fresh powder up in the mountains and burying trees, laying down the perfect terrain for the first ride in months. And when it comes to backcountry snowmobiling, you can’t beat the aftermarket machines built by Crazy Mountain Snowmobiles.

Also known as CMX for short, Crazy Mountain  does things right. They build the sort of snowmobiles you’ve always dreamed of building yourself. The entire team is made of dedicated and experienced snowmobilers. They only design sleds they themselves love to ride.

Crazy Mountain does things a bit differently than other aftermarket snowmobile manufacturers in the industry. Rather than trying to replicate what an existing factory sled already is, they build each of their machines from the ground up. In short, CMX snowmobiles are constructed from scratch. This ensures they are some of the highest performing and best quality snowmobiles available.

Crazy Mountain Motorsports Inc. got its start in 1996. As is mentioned above, the entire team loves snowmobiling and is committed to the constant evolution of CMX products. In fact, this dedication to backcountry snowmobiling and the mountains is a major reason for their success. They have always lived and ridden in the mountains. Their motto says it all, “We don’t just built ‘em, we ride ‘em.”

The current offering from Crazy Mountain Snowmobiles comes in the form of the CMX-X sled. Because Crazy Mountain keeps things small and tight knit, they currently offer only one complete snowmobile. However, several components of this machine, including its belt drive system, are available separately for purchase.

Each CMX-X sled is built from the ground up, from scratch. The design of the snowmobile took several factors into consideration including lightweight, reliability, handling, and overall performance. The machine was then developed to accomplish these goals as best as possible.

Though Crazy Mountain uses some factory Polaris parts on their snowmobiles, the bulk of the parts are manufactured in house. These include CMX billet aluminum side plates, a CMX modified cast aluminum bulkhead, and a CMX chassis.

One of the most notable features about the CMX-X is its ride height. It is built slightly higher than most other snowmobiles to give it more clearance on the snow. This equates to less drag, more speed, and better handling.

Numerous additional features make the CMX-X stand out from the pack. These features are discussed in greater detail on the Shop Talk page of the CMX-X website. Anyone interested in purchasing one of these machines would do well to review the various specifications discussed here.

Is a CMX Snowmobile for You?

Though they are undoubtedly great machines, a Crazy Mountain snowmobile isn’t for everyone. The primary reason for this is that they are designed to be the highest performing machines possible. This means they are best used by intermediate to expert riders. They are not the best choice for beginning riders.

Crazy Mountain snowmobiles are designed for extreme backcountry use. If you’re looking for a sled for other applications, a CMX machine might not be for you. They are powder hungry machines that feed off the most extreme terrain you can throw at them. If you’re a powder junkie, if you’re an adrenaline junky, if you’re an experienced snowboarder, then Crazy Mountain Snowmobiles is right up your alley.