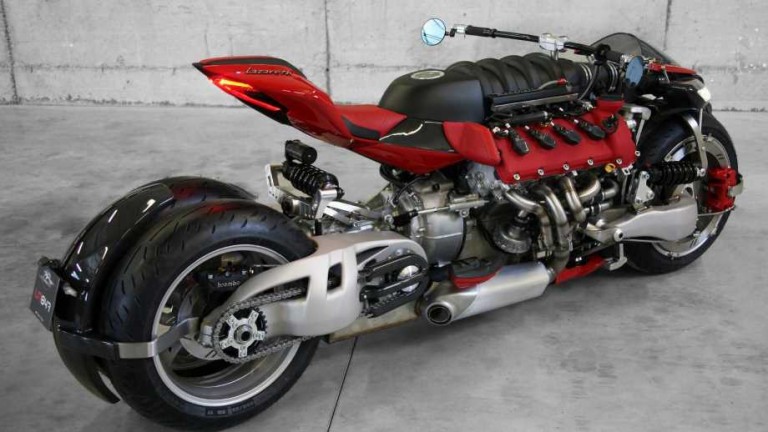 What are Lazareth Motorcycles?

Lazareth, a French automobile and motorcycle manufacturer, has perfected the art of building crazy awesome vehicles. If that sounds over the top, consider this:

The Lazareth LM847 motorcycle (it’s technically a quad vehicle because it has two parallel wheels in the front and two in the rear, but they are set so close together that you will still lean through turns) is a sport motorcycle built around a 4.7 liter V8 engine from Maserati.

That’s a sports car engine (and a big one) in a much smaller vehicle than it was originally designed to fit. You’ll get 470 horsepower and 457 pound-feet of torque, which could throw you off faster than you can blink. You’ll have to learn to control this piece of machinery!

Consider the Lazareth Wazuma, a quad vehicle with an entire 500 horsepower V12 (supercharged) engine from BMW to provide power and performance beyond what you could have imagined – until you sit on it.

This rocket of a vehicle may just be the signature piece from Lazareth. Each one produced is made in limited editions and numbered for authenticity. You’ve never seen a vehicle like this, with its unique design and undeniable performance.

The innovative design of the Wazuma arranges the wheels in the shape of a W – the two front wheels span the width of the vehicle while the dual rear wheels are set much more closely together. This gives the Wazuma incredible stability, which in turn provides driving sensations unlike any other, along with strong acceleration and efficient braking.

The Wazuma is an incredible vehicle that will have wide audience appeal based on the company’s moto that “creation is only limited by the imagination.” Each individual Wazuma is made to order and takes about a month to assemble.

Lazareth is the company started by Ludovic Lazareth, who began by modifying cars and bikes before moving to creating and manufacturing vehicles of his own design. To fulfill his vision, Lazareth builds full scale models and then carves and refines until he achieves the design style for which he was seeking.

The models enable him to build molds, which he then uses to put together the final version made of carbon fiber, Kevlar and fiberglass. Lazareth’s unique method combines the latest methods from art, craftsmanship, technology and industrial development to produce his one-of-a-kind vehicles.

Everything in a Lazareth vehicle is picked for its purpose because it is the best in its class – why else would you put a sports car’s engine in a motorcycle?

If you have an idea for a motorcycle or vehicle of your own, get in touch with Lazareth. Their distribution model also works perfectly for larger projects that may require more distribution. From the time you give them the idea, they swing into action to put together a prototype and then put it into production. They won’t stop until your product has been distributed both nationally and internationally.

Because they look so otherworldly and fit for a superhero, Lazareth vehicles have been used in several Hollywood productions and by stunt teams. They count some of the top manufacturers in the industry among their partners, and they stand behind what they sell.

To order or buy Lazareth vehicles, contact the company through their website. They offer a contact form, email address and phone numbers to both of their facilities in France and England.

If you want an over-the-top vehicle with power that exceeds anything you’ve ever experienced, call Lazareth today – you won’t find anything better!

Hello, and welcome to toysforbigboys.com. My name is Joshua Zimmerman. And today we’re going to be talking about the Lazareth Motorcycles. I am very excited to be talking about this because I drive a motorcycle myself. However, it is nothing like the things coming from Lazareth. My bike is from 1994. And the things from Lazareth are from 3094, the future. Who knows? These are bikes fit for a superhero. They are that powerful, that fast, that amazing. That is because they are built by Lazareth, which is a French vehicle and motorcycle manufacturer that specializes in creating amazing vehicles. Let’s take the Lazareth LM847 for example. Now, this is technically a quad vehicle but it rides like a motorcycle. It has two parallel wheels in the front and two parallel wheels in the back, which creates added stability. And you’re going to need that stability when you’re traveling at such breakneck speeds because you’re going to really want to lean into those turns. And I say breakneck speeds because it’s true. It is going to travel very fast because it is powered by a V8 Maserati engine. That’s an incredible amount of speed, an incredible amount of power, 470 horsepower, to be exact. Now, the Lazareth Wazuma is another quad vehicle built around a supercharged V12 engine coming straight from a BMW for unrivaled power and performance. Each bike is made with limited additions and is numbered for authenticity. I guarantee you’d never see a bike like this, with very unique design and undeniable performance. These bikes are precisely tuned, using state-of-the-art materials, such as Kevlar, fiberglass, and carbon fiber, creating a super lightweight ride. Combined with those powerful engines, it’s going to blow your mind. These are undeniably fast, unbeatably powerful. These bikes, like I said, are fit for a superhero. You could imagine Captain America riding around the streets to save an entire city on one of these. So if you want an over-the-top vehicle unlike anything you’ve ever experienced, unlike anything you’ve ever seen, give Lazareth a call today. You’ll be very happy you did. Once again, for toysforbigboys.com, my name is Joshua Zimmerman, your product specialist. And while you’re here on our website, go ahead and check out all the other amazing products we have here for you. Have a good one.