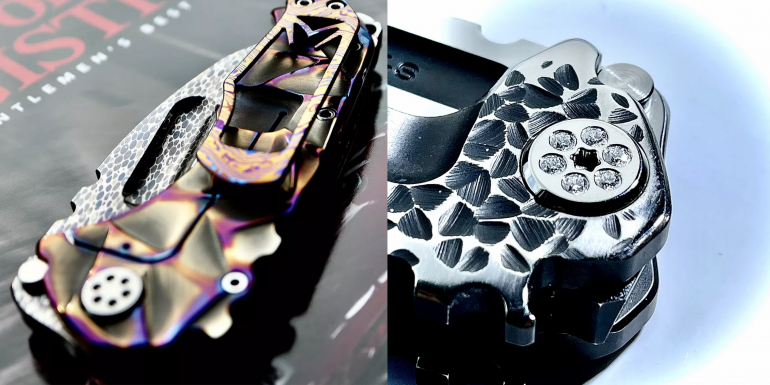 You could say that this is the best yet Dress Medford to be sold on the market! The Praetorian Ti feels like an absolute treasure when you hold it in your hand. The Praetorian Ti is a one-of-a-kind treasure from ancient times, never to be made again. This has to be the fanciest Medford knife ever made. The Praetorian Ti costs $8,000 USD. Feel the pure bad assery of this knife today!

As seen in duPont Registry Magazine, the Micro Ti is a one-of-a-kind piece with .70 carats of burnished set diamonds located in the pivot. The Micro TI is two-tone with PVD and polished accents, but that’s not all, the Micro Ti has also been contoured. The Medford Guy himself says, “Really one of the most gorgeous knives I’ve seen! Talk about pocket jewelry!”

Coming in at about 2/3 the size of the Praetorian Ti, the Micro Ti offers the same scale thickness and blade as the Praetorian. “You can slip this beefy little monster into smaller pockets, with the same nasty grip and punch of its big brother,” says the Medford Guy. So whether you are looking for a smaller version of the Praetorian, or if you are just looking for a chunky knife, then this knife is made for you! The Micro Ti costs $6,000 USD and is equipped with: Satin D2 steel blade, a Tumbled locking side, a flamed show side, a flamed chip, and flamed Ti hardware.

The TFF-1 is an ambidextrous tactical folder. The Medford Guy developed this knife specifically for military and law enforcement personnel. The Medford Guy states, “This design circumvents fixed-blade restrictions and accommodates tactical operators looking for a space-saving knife carry option. This blade is meant to augment or replace a fixed blade and is built for hard use.” The TFF1 costs $700 USD.