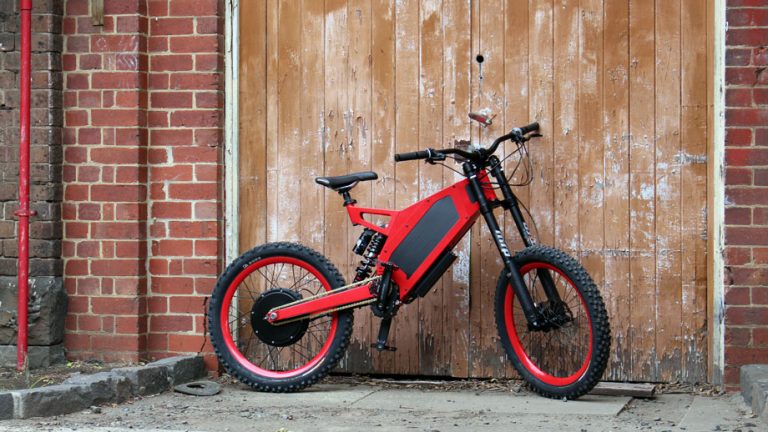 What are Stealth Electric Bikes?

Stealth Electric Bikes is an Australian company producing what they call “the finest electric bikes on earth.” Built with military precision, these bikes are almost a cross between a motorcycle and a bicycle. Stealth’s engineering team has built three models with premium parts. Each model is built around a motocross style and includes an all-terrain frame design that can handle any mountain bike trail you throw at it.

No matter what your riding style, Stealth has a model for you. The B-52 is an all-around endurance machine, while the F-37 excels on technical downhill trails and the H-52 is built for motocross enthusiasts who are looking for something more.

If you are ready to fly under the radar, a Stealth Electric Bike just may be your vehicle of choice.

The Stealth P-7 will transform your typical daily commute into a thrilling adventure. Forget about wasting your time in traffic and spending your money on gas with the P-7! Commuting can now be something that you can enjoy, instead of dreading. The Stealth P-7 is equipped with a 9-speed gear train and has a gear range low enough to climb up steep hills. Weighing in at 64 pounds, the Stealth P-7 can travel up to 60 miles and can hit a speed of 20 mph on a single charge.

The Stealth P-7R weighs in at 63 pounds and can travel up to 100 miles while reaching a maximum speed of 28 mph. The P-7R is equipped with a gear range low enough to climb steep hills or even ride without any electrical assistance. The Stealth P-7R comes with a twist grip throttle, which gives the same feeling as riding a motorcycle or dirtbike. You can easily add the P-7R to a bike rack or transport it in a van.

A hybrid model like none other that you will see, the Stealth B-52 combines traditional pedal power with 5,200 watts of electric power (Stealth’s highest power output), which enables you to hit a top speed of 80 km/h (50 mph). It has a range of up to 80 km (50 miles) on a single charge. The Stealth B-52 includes an advanced 9-speed sequential gearbox and Magura hydraulic disc brakes that let you stop instantly.

If you want to raise your trail-riding game, the Stealth F-37 is your bike. It makes full use of Stealth’s hybrid-electric drivetrain with an ultra-lightweight transmission and 3,700 watts of power. Rider control is maximized with a rear-wheel Stealth frame, and the handlebars are built for ultimate maneuverability. The Stealth F-37 can hit a top speed of 60 km/h (37 mph) and has a range of up to 100 km (62 miles) on a single charge.

Built for motocross aficionados, the Stealth H-52 delivers an incomparable riding experience no matter the conditions. With very low maintenance and an extra-quiet ride, the H-52 is built for lots of use. Its 5,200 watts of power can propel it to a top speed of 80 km/h (50 mph) with a range of 55 km (34 miles). When you slow down and stop, be sure to activate the Regen braking, which converts kinetic energy into electrical energy, which is then routed back to the battery, extending your ride time and range.

Built by hand with advanced ebike technology in Australia, Stealth Electric Bikes are available for sale through qualified dealers around the world. Prices are not listed on the manufacturer’s website, but the B-52 sells for $9,999 through a dealer in the United States.

This investment in an electric bike will serve you well as you seek adventures and thrills beyond the dreams of the crowds. You get the power of an engine with the control of biking on your own and the lower cost of an electric-powered motor instead of a gas-powered engine. Built with military durability and strength, these pieces of advanced technology will last for years with proper care. Call a dealer today to set up a test drive so you can get started on purchasing yours!